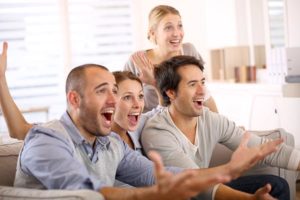 Group games have always been a real favorite of mine.  That isn’t really very surprising as I love people and both large and small group gatherings.  My amazing wife Kathy is an incredible hostess!  We often have different groups of people over throughout the year.  We enjoy getting to know people, and talking with them as well as engaging in activities together.

During the summer, I just love yard games or water games! In the winter it is board games, card games, and other indoor active games in which people mix together and laugh and play.  These times are so enjoyable and encouraging when new and old friends come together.  As a child, I learned charades.  Similar to that old game is the current board game called “Guesstures.”  The rules of these games seek to have the “actor” communicate meaning without making any sounds whatsoever.

Early this morning as I was reading the Word for my daily devotions, I read of a man named Zechariah, who was possibly the first recorded “silent actor” seeking to communicate meaning.  He was a priest who served in the temple in the first century.  He was married to Elizabeth, who was barren, and was well into old age.  As Zechariah performed his duties in the temple of the Lord, an angel of the Lord—Gabriel—appeared to him.  Gabriel told him of a miracle baby who would be born through him and his wife within a year.  When Zechariah came out late from his temple service, due to his shocking visitor, he was unable to speak because he was hesitant to believe the words of the angel when he considered his age and that of Elizabeth.

Elizabeth (as well as their family members) never heard the story of the angel Gabriel’s conversation with Zechariah in words, but had to resort to hand signals and written messages.  These communication forms became part of their daily lives. In Luke chapter 1, the story continues to unfold until Elizabeth gives birth to a son in her old age and everyone is so excited.  On the eighth day, when Zechariah and Elizabeth went to the temple to circumcise and name the baby boy, the people present assumed he was to be Zechariah after his aged, mute father.  When Elizabeth spoke up, refusing the name, the father is consulted about this.  Zechariah asks for a slate and a writing instrument.  He wrote out clearly and emphatically –“His name is John.”

The Bible states, “Immediately his mouth was opened and his tongue was loosed, and he began to speak, praising God” (Luke 1:64).  No more guessing, just loud worship of God and laughing and celebrating at the wonder of this event and the curiosity of who this special child would become.

Isn’t this an amazing story of the first “charader” or “guessturer?”  I wish I could have been there to see that happen!  God is an amazing God who works in amazing ways with His people, seeking them to respond in obedience.

Like Zechariah, let us speak forth His praises every day while we have the voice to do it!  We proclaim His goodness and grace with our actions and our words.  We are the witness this world needs.  Will you please pray for God to speak to and through the students of Grace Christian University?  They truly are the mouthpiece of the Gospel of and to the next generation.